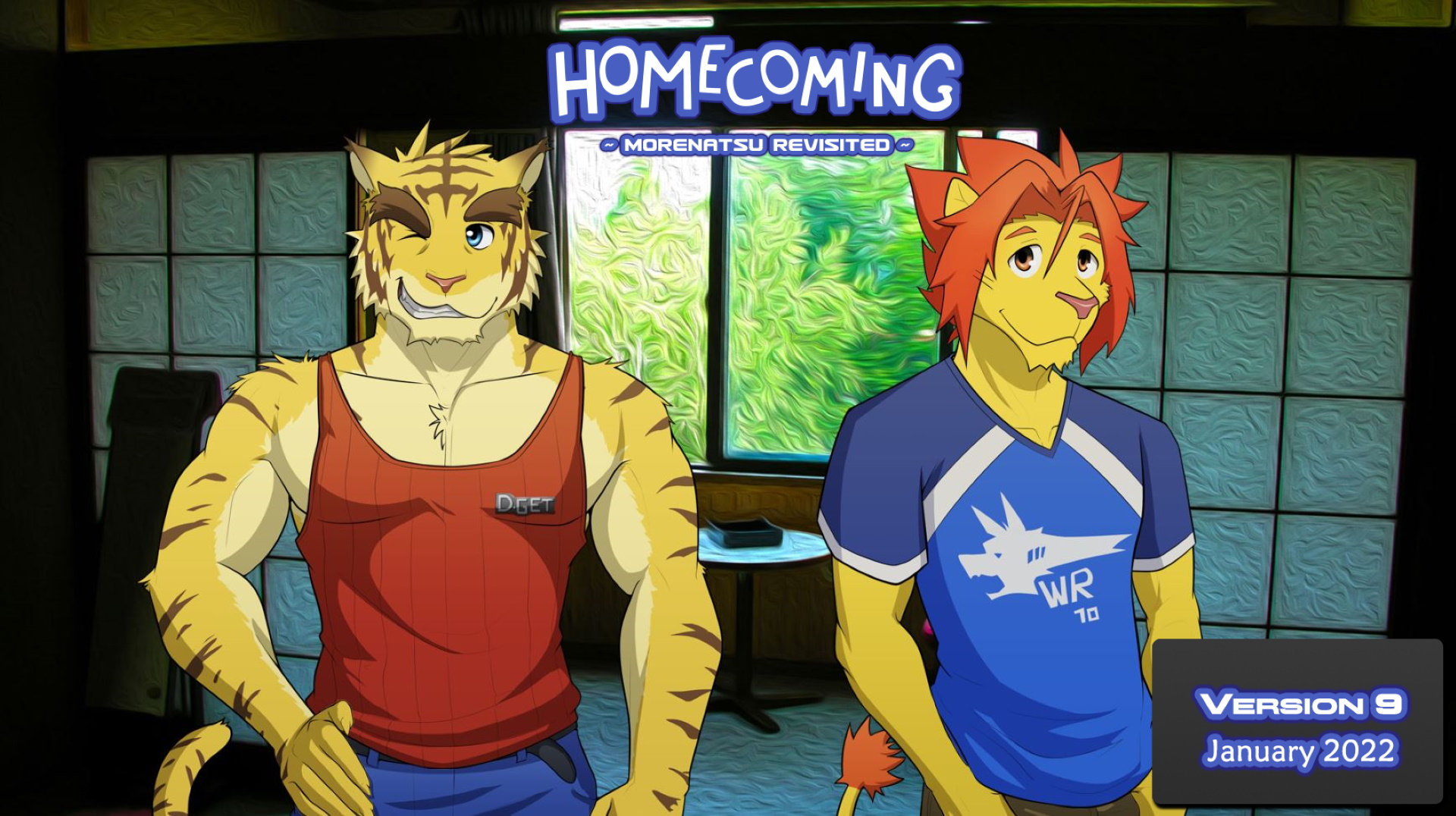 We’re back with another update for Homecoming. This time, we finish up Act 2 for most of the cast and begin transitioning into individual route content. The only characters still waiting for their August 15th content are Kyouji and Soutarou, which will most likely come in the next build drop. We also have the finished sprite revamp for Soutarou included in this month's build!

With August 15th out of the way, we have officially reached the grand route split. The first character to receive the route treatment is going to be Kounosuke. We have the writing for him completed, all that needs to be done is coding. As of this build, you should be able to read the first event in his route content!

As mentioned in a previous post, we will be focusing on programming routes one at a time. In terms of the content base we already have complete and waiting to be coded in, we have Tatsuki, Juuichi and Shin from our Revisited project, and we have Kounosuke’s revamped route 100% finished. Kyouji’s Homecoming route isn’t far off either sitting at roughly 95% complete.

We will be implementing the finished routes into Homecoming in the following order:

We expect the remaining four routes to be written in roughly this order:

Thank you all for playing Homecoming! I hope you enjoy what we have in store for you this time!

(only missing Kyouji and Soutarou's events)

A reimagining of the classic VN Morenatsu.

First of all, the story isn't yet completed yet, and we're only just getting into finishing each character's route, starting with Kounosuke.

However, if you're wanting to do a specific camping event and it isn't letting you, you might have missed something earlier on that is required in order to access their event. Also, bear in mind, as of Build 9, Kyouji and Soutarou's event isn't ready yet.

I plaing this game in the phon byt when i download the new build it come as a new one and not as an updet so in the end i'v got the old one with the memory and the new one with no memory can somone help me?

LOL tora being the last one againnnn . im not even sad about that im sad about kouya ;-; yall remember "'We are forever with'. Even if we're apart, we'll always be connected. You have to keep going foward. I'm sure that if you do, we'll cross paths again someday."??? i will never forget how much i cried when i read that.

Tora is the last one. If anything happens to him again I will 🔪💣 this place and myself

Okay I'm loving all of the content that finished off the camping trip, seriously some very touching moments for all the characters we have so far. Juuichi's day two of the camping trip, however, takes the cake in my opinion. Hiro and Juuichi's moment together (without giving anything away here) is just really tender and makes it feel like Juuichi is allowing himself to be a whole lot more vulnerable than he's been able to be previously. It's almost like a silent coming out moment to himself, tbh, like "Haaaah, I guess there's no beating around this bush anymore, is there?". Between this moment and their moment on the 5th, I really love Juuichi's tendency to seek out one on one time with those he cares about, and that the unplanned moments he has alone with Hiro seem to provide for a lot of growth for him too. Super relatable, personally. Wonderful work, friends!

Any status updates on the iOS update?

The iOS version is now out. Thank you for your patience!

Are all sprites going to be reworked? Because now the newer ones are clashing a little with the slightly older ones (like Shun).

Yes, all sprites are getting an overhaul. So don't worry about the new ones clashing with the old. The old ones will be replaced.

Will Ten's bonus route be implemented in the near future?

So with his new sprite, is Soutarou now taller? Or are the sprites going to be similar in height regardless of the character's actual height? I seem to remember him being on the shorter end previously, but now he seems as tall as Torahiko which caught me off guard a little bit.

Heya, Soutarou is indeed taller in this sprite. He was very small in the original due to him being more of a shota type character, and while we didn't keep that characteristic in Revisited, he ended up looking fairly small due to how the sprites were rendered onscreen. With the new sprites, we're making everyone take more real estate on the screen, as well have decided to represent Soutarou being aged up by making him look his actual age, and so the difference might seem a bit stark compared to the other unfinished sprites.

Hrm... sounds to me like I'm going to need to wait a while, all three of my interests are in the last four, I still should at least finish camping though!

Did tora get thicker?

I swear he looked scrawny last time I checked this game

He got a new sprite update with build 7, which is his current look. My head canon though is that he works out a ton between updates.

If your headcannon is true, this isn't his final form ;P

How nice, Torahiko is last. What a sweet relief to know that if this project ends up like the original, he still won't have a route as well. Sorry for being so b****y, but after knowing how the original went, I would've made Torahiko's, Kyouji's and Soutarou's routes top priority; you know, in case of failure, to have the sweet relief that the only ones with no routes have one, a bit like finishing the old legacy type (even if this is a fan remake)

Ever since I discovered the Original last year, I wished for there to be routes for Kyouji, and especially Torahiko, since he really impressed me (my first route in the game was Juuichi's, and after the festival, Torahiko left me with a good impression and wished to see what he was like in a route).

The frosting is the best part of the cake, but you've got to put it on last ;) I love our tiger boy too, but from the notes the dev provided above it seems that they are using written assets from the Revisited project first, which didn't include as much for Tora. They seem to be doing things as efficiently as possible so that the final product is completed both correctly and in a timely manner.

Beside that, Stormsinger seems like they're working on Homecoming from a completely different headspace than the original development team for Morenatsu: more as a passion project than as a product needing to be completed. So I'm confident that they'll follow through where the original team wasn't able to. We just need patience (as with all furry visual novels, it's a long process).

You're right, maybe I just want a bit too much "In case it fails, at least it finished what the original didn't" insurance from Stormsinger. Because, if I know for sure, 100%, that this game will be fully finished, then I don't really mind Torahiko being last.

The original also had the mindset, "Torahiko is the icing on the cake because he is so special, so to make the most of it, he will be the last finished route". And well, you see where that went. So, excuse me for having a hard time accepting this mindset. If I am gonna wait, at least keep the promise, and I will be happy.

There are reasons we are saving Torahiko for last. As he is considered the canon love interest for Hiroyuki, we want to ensure that his route is handled correctly. By completing everyone else's route first, we are certain that we can do him justice. Gotta save the best for last.

Additionally, StoicBuzz is correct, in that we have recovered some assets from our original Revisited project. This is a passion project, and it is one that I intend to see through to completion.

Dzahn and I are usually on the same page, especially as far as writing is concerned. Many times, when I've written the script for an event and sent it to him, he's made alterations that have improved on it, in a way that compliments the scene. Additionally, I have done the same with his work.

The only difficulty I face compared to the others is my location. Everyone on the team, not including myself, lives in the US. I, on the other hand, live in Australia, and the extreme time difference has made it a bit difficult to communicate effectively at times (part of the reason why I passed the torch of director back to Dzahn), but we're all a group of friends who are committed to working on this project.

Ok then, I just am scared of another unfinished Morenatsu. I don't mind waiting, especially if it is to make him justice. But after the failure of the original, I am scared of repeat scenario.

I wish you all good luck, I will wait, and when he will have his route, I will make the most of it.

Just a silly question, but what routes will remain the same, and what routes you guys will revamp like Konosuke's?

As of now, Kouya and Shun's routes will be changed, with Shun receiving the most change.

looking forward to it~ :D I like the improved designs.

i wish ten has his own route... his the tsundere type (only for me, i dont know about the other) so its knda shame that he didnt have a route.

Will Ten be getting his own route?