A Discussion About the Update Schedule 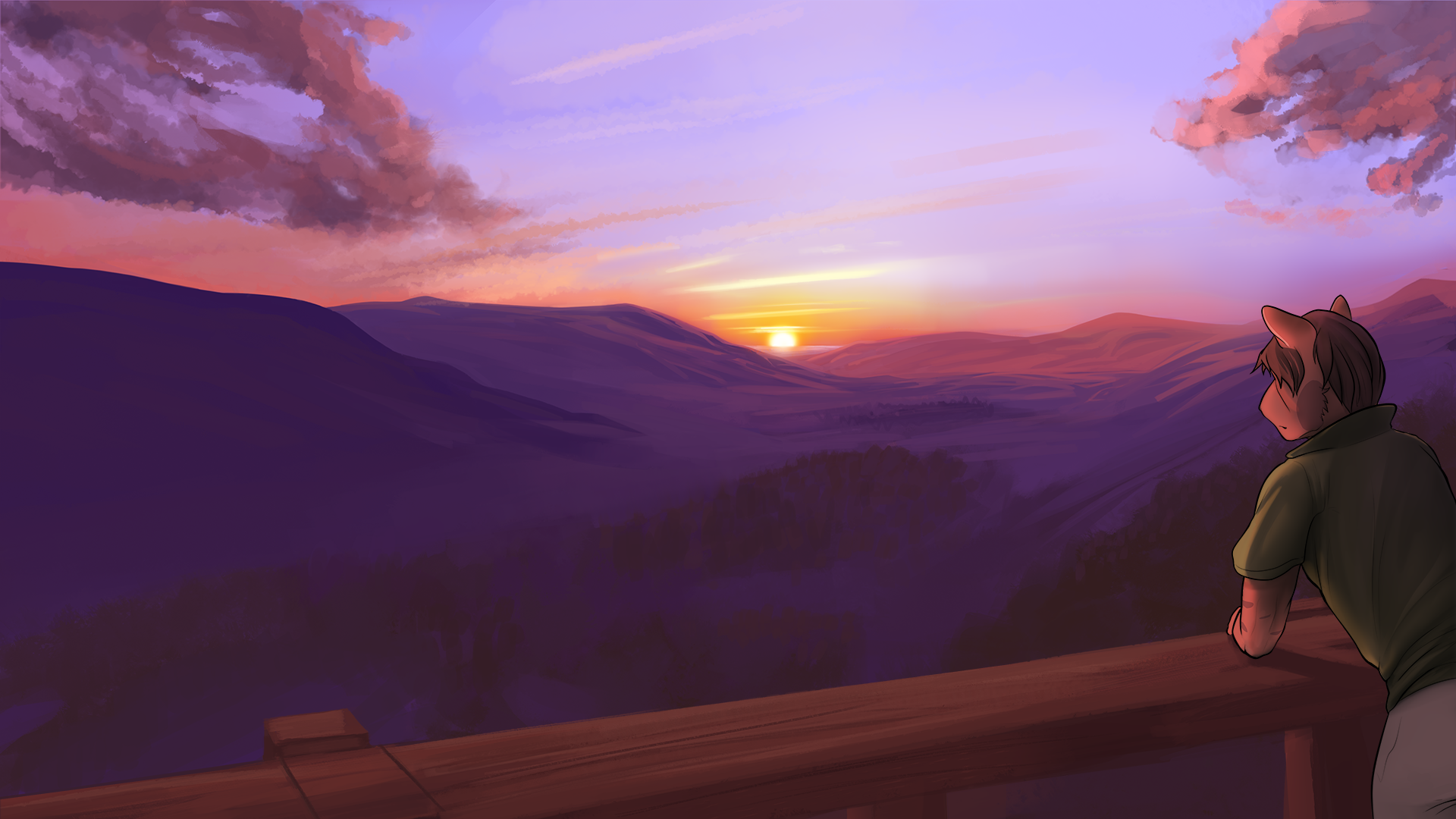 Hey everyone! I hope this post finds you well!

I’ve been needing to talk about something for a bit now that’s been a problem. As you guys may have noticed if you’ve read my update blurbs lately, I haven’t exactly been having the greatest 2021 in terms of my mental health.

Fortunately, I think I’ve been able to figure out one of the reasons why I’m not feeling so great anymore.

Unfortunately, though, it has to do with the current update structure we have for Santa Lucia.

SL is a significantly more plot and narrative focused VN than our contemporaries, and a big theme of the game is masks. In fact, the biggest meta part of the whole project is how the game itself wears “Slice of Life” as a mask to cover its dark secrets.

As a consequence of this artistic choice, the expectations of how a “Slice of Life” VN is typically updated fall on the game, too. Players have grown accustomed to “Slice of Life” Vns updating their routes in a cyclical fashion, usually one month per character route. The issue this has presented to SL, though, isn’t necessarily visible to the reader.

I have been struggling really bad to reconcile the expected update structure with my ability to keep this heavily narrative and detail-focused plot consistent and structured. If we look back at the past two Carlos updates, we can see quite clearly how badly I faltered trying to keep up. I had to go back in the timeline to add in additional days to his route because of narrative elements I didn’t manage to fit in properly.

As it currently stands, I am essentially juggling three different stories that all need to fit into a structure that is woven and dependent on details that I desperately need the structure for in order to write content that meets my high standards. Constantly switching between who’s route I’m writing for means that the moment I start to get on a roll with one character, I’m switching to another, which has had the effect of killing all momentum I built up over the course of a month as well as diminishing my motivation to keep going.

If I were to make a somewhat tasteless comparison, this update schedule bears an alarming resemblance of a torture method I learned about as a Psychology student. It’s goal was to destabilize the victim’s sleep schedule by playing the same loud song over and over so that they get used to it, and then right as they’re about to fall asleep, they’d switch the song. Now, the human brain isn’t wired for this, so this results in the person suddenly becoming wide awake again. Then they’d have to start falling asleep from scratch...until the torturer switches the song again.

This is kinda what it feels like with the monthly route rotation. Just as I’m starting to get in a rhythm with a character, I have to switch to another at the beginning of a new month. This means I have to start from scratch and build up all the momentum again, this time for a different character only to have it undermined again by the end of the month. It really upsets me that this is happening, too, since I took February off for mental health reasons and encroaching burnout, only to jump back into things and find myself approaching burnout faster than I ever have before.

I desperately need to make a change before I end up unable to work on SL anymore.

This is what I’m proposing to do, and it’s the reason why I’m making this post so that we’re all on the same page because I’m well aware of how unpopular the current structure ended up being. I attempted to go for a compromise approach since I anticipated something like this happening to my mental health, but I also knew players are accustomed to a certain style of update schedule. I figured giving one character an extra update over the other two would help me push the story further faster and provide the structure necessary to smooth everything out.

Santa Lucia is organized into three acts. We have already finished Act 1, which capped off with the service trip. There are two more acts, each with equally dramatic endpoints.

What I am proposing is that I focus on a single character up until the end of Act 2, then switch to the next in line.

What this offers me as a writer is a consistent storyline to focus on, which should mean you the reader receive a higher quality route. With the first major route pushed all the way to a threshold, that also means the vast majority of shared content between the routes is already written, which means the second and third routes will progress at a much faster rate.

The last benefit it offers is mainly for me as the writer. The update schedule as presented so far has been surprisingly detrimental to my mental health, and I would like to be able to address that before things start spiraling out of control.

Since this is a pretty big change, I opened a poll for our Patrons to vote on which character they would prefer to be the route I focus on until the end of Act 2 threshold. That will not affect this month’s focus on Nate, which is still going to release according to schedule.

Thank you guys for hearing me out on this. It wasn’t easy having to come clean about my mental health. As you have probably figured out by now, I’m an intensely private person, so talking about my issues on such a scale really fills me with anxiety.

Here’s hoping for the best!

Whatever makes you feel most comfortable. I'm really into this VN so I don't mind the update schedule! Mental health is, however, more important than keeping up with a visual novel and it is your own work so you are calling the shots!

I think the idea of focusing on a single character until you're done is a good approach. Much like some of the other readers, I've played Sileo as well, and found that it was much easier to follow, and actually remember, the things going on in the story if I only had to focus on a single character at a time. Personally, though, I think it's YOU that needs to be happy with what you're doing.

If focusing on a single character's story makes things easier and less stressful, do it. If it's easier to do split things up, do that. One thing I'm sure you WOULDN'T want to do us suffer burnout and feel the need to stop entirely because you're getting overwhelmed.

Regardless of what you choose to do, you've made a fan of me , and I look forward to seeing what happens with the next update, regardless of whose story it is that gets the update.

I would love 1 character at a time because it reads a lot easier and it is the only reason I am reading other character's stories from Sileo otherwise I would only wait for the character I wanted to read. this is what happened for me with tennis ace I liked Keisuke's character so I am not even starting to read the other stories. thus I cant wait for the change.

I am not a patreon but I would love to see Nate's route.

and also you should do the thing that is best for your health.

I agree, single-route stories feel much more enjoyable for me to read since I don't need to wait 3-4 months for that part of the story to update again and it flows much nicer. Currently I am only following Carlos route, but if only a single route will be updated then I will gladly read it regardless of which character is chosen.

I think that kind of pools is just a risk to cut down profit.

You can make happy everybody that like Carlos and risk lose all others that like the other characters. Of course not exactly this way but some in this away. I am playing the tiger and panda routes since I downloaded the Santa Lucia 7 maybe the 9 or six. Heheh I don't remember. But some people may not want wait four months for a update or more.

True that I use to be anxious waiting longer updates that I started to update the novel each two or three months. Not that it matter, I have been reading like 10 to 20 Furry VNs in development at the same time. This is the one that I update more often (Just reading Amorous now. A pity its 9 routes are so short with lots of choices.).

A story is a story you write it the way you need even to avoid rewriting a lot in the future because someone did something that change all the story.

P.S.: I am enjoying to read the story in the mornings I lay down on my bed turn lights off and starts to read it. Sometimes I feel tense but I only felt scared once when those read eyes jumped from no where in the middle of the screen. I most woke up my mother with my scream. *lol* I like that because it do not make me feel very nervous. But I understand It is just the start of its story. Heheh That is one of the novels I am loving more even with all part I do like that is normal in a story to mix your feeling with differentl event.

Just remember this is yours story as well as to make your readers feel the feelings you want them to feel.

While it may not be the "standard" way of updating visual novels, I've read a couple that adopted a similar approach (Echo and Sileo pop into my head immediately) and it seemed to work well for them, and from a reader's perspective it can certainly be nice to not have to remember what happened in a character's route three months ago, so I'm honestly looking forward to the new update schedule.

I read Echo. They just launch it complete version this April 1st 2021, between a year or two that I read it. I didn't read the last route yet.

That novel is so tense and scary that broke so e screams in my head during a week or two. @.@ Lol I am weak to terror stories.

I mean of course people won't mind if it's what you have to do to continue the project. I'm absolutely sure though that half a year of updates for a character the player isn't interested in will have a high chance of them forgetting about the VN.

I think 3 or 4 months approaches the limit where if the player stops playing that much, there's a high chance of them not caring about the game anymore.

A few reasons for that, one being that you now forgot a lot about the game, but not enough to have fun reading it again because you still remember all the major plot points, and you'll also instantly remember again as you read.

To minimize that, I'd do what you are probably going with, do popular characters first.

hey do what you gotta do for you, if it means doing act 2 or even 3 one character at a time or even walking away from the project to live your best and happiest then do it pal! the folks that mind don't matter, and the folks that matter won't mind.